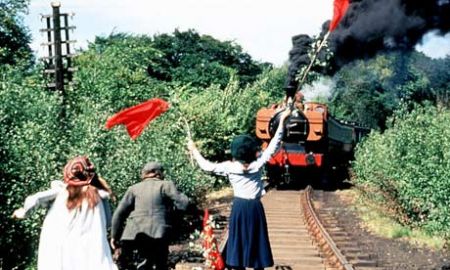 OK, so this blog post is a bit off-piste, I admit.

In what is, I think, the result of a confusion of Kates, we received a recent enquiry directed to Kate Agnew, who runs the excellent Children’s Bookshop in Muswell Hill.

The writer, a teacher, said, “I am a primary school teacher (for a mixed-age year five and six class), who is hoping to do some teaching about a local train line being built in our area during the Victorian era. I would like to link it to a fiction story where the children travel by train, and where the train travel plays a significant part. However, all searches for Victorian children’s fiction seem to end with The Railway Children, and this story gives completely the wrong message about railways- that they pass one by, and do not directly expand one’s world. If you know of any story that might suit my class’s requirements, I would be hugely grateful to hear about it.”

Can anyone out there suggest anything?

I stumbled upon this piece about Victorian literature and railways, but there’s no mention of writing for children in it.

Of course, the Victorian period and, even more, the Edwardian period, were golden ages for children’s writing. Thinking of authors who remain popular today, E Nesbit stared, with The Story of The Treasure Seekers, publishing children’s books on the cusp of the Edwardian period. Frances Hodgson Burnett was more clearly an Edwardian, though her first fully realised children’s novel, _ A Little Princess_, published in 1905, was a rework of an 1888 work. I can’t think, offhand, of a single serious mention of railway travel in either.

Lewis Carroll is a more emphatically Victorian writers for children, (and Alice does go on an extraordinary train journey in Through The Looking Glass, and What Alice Found There).

Charles Dickens is also an emphatically Victorian writer, and many of his books could, with the right kind of adult intervention, be enjoyed by year five and six children, particularly A Christmas Carol, Oliver Twist and Great Expectations. Perhaps his own experience of the Staplehurst rail crash in 1865 put him off writing much about trains: The Signal-man is hardly a celebration of railway travel.

In North America, L M Montgomery wrote at the beginning of the Edwardian era about Anne of Green Gables growing up… and her arrival at Matthew and Marilla’s house is after a train journey to Prince Edward Island. There’s a fair bit of train travel in Louisa M Alcott’s Little Women books, too, though the focus is never on the journey.

But perhaps the greatest Victorian evocation for children of the potential and excitement of train travel is the Robert Louis Stevenson poem, From a Railway Carriage, which was the first piece of poetry I ever learned by heart:

Faster than fairies, faster than witches,
Bridges and houses, hedges and ditches;
And charging along like troops in a battle
All through the meadows the horses and cattle:
All of the sights of the hill and the plain
Fly as thick as driving rain;
And ever again, in the wink of an eye,
Painted stations whistle by.
Here is a child who clambers and scrambles,
All by himself and gathering brambles;
Here is a tramp who stands and gazes;
And here is the green for stringing the daisies!
Here is a cart runaway in the road
Lumping along with man and load;
And here is a mill, and there is a river:
Each a glimpse and gone forever!

But if you’ve suggestions of Victorian (or early Edwardian) mentions – ideally positive – of train travel in children’s books, let me know, and I’ll pass on the information to the teacher in question. It might even be interesting – and other than Maria Merryweather’s mid-19th-century journey to Moonacre in the 1946 book, The Little White Horse, by Elizabeth Gouge I am a bit stuck here, myself – to know about descriptions of train travel in children’s literature written in the 20th and 21st centuries.