This month we’re absolutely delighted to have published Frank and Bert: The One Where Bert Learns to Ride a Bike – the second hilarious adventure featuring the fox and bear double act from bestseller Chris Naylor-Ballesteros. And today, we’re very excited to be sharing a guest post from Chris!

Now that Frank and Bert are officially Two Books Old, I’d like to write about how the characters came about and what the inspirations were for the stories.
Unusually for me, the basic idea sprung from a random ink doodle I did. I more often think a lot first about a story and then start sketching only when there’s a fairly solid idea in mind.

The drawing I did was of a huge but quite sad-looking animal standing behind a thin little tree. Underneath was a caption in the style of a natural history program that said the animal was “known for its highly effective camouflage, blending almost invisibly into its surroundings”, then invited the viewer to try to spot it in the picture.

It reminded me of when small children play hide-and-seek and they run off to stand behind the curtains – legs and feet sticking out below. But the silliest part of it all is when us grown-ups collectively pretend we can’t see them. “Oooh, where is she?”, “Gosh, where did he go?!” and then we start ‘looking’ for them. Meanwhile the child is getting more and more excited and proud of their ingenious hiding place.

I liked this hiding animal idea but it didn’t make much of a story. At first I thought about illustrating a little series of animals that were really bad at the thing they were supposed to be good at. Or animals that had just broken something or made a big blunder and were trying to own up and say sorry. Humans are like this, we’re always getting things wrong or not being very good at things. Even with our friends, we sometimes do or say the wrong thing then don’t quite know how to fix it. That’s what makes people fascinating. Those seemingly perfect ones who win all the time are very boring.

But you can’t play hide-and-seek on your own, so I needed a duo. And if one was a big, round-shaped bear sort of animal, then his partner could be a smaller, pointy-shaped fox sort of animal – Laurel and Hardy style. And my motto for their personalities was that Frank knows things, whereas Bert feels things. They both figure things out in their own way and get there in the end. 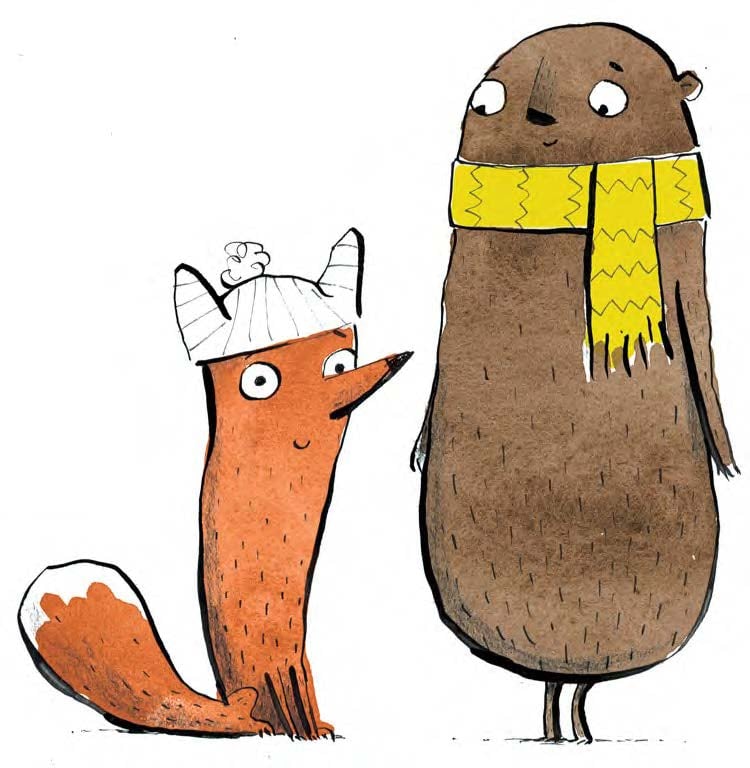 Then we were off! Except that thinking of stories that really work and don’t feel a bit contrived or slightly hammy sometimes takes me ages. But, with the patience, creativity and skill of the Nosy Crow Dream Team Lou Bolongaro and Nia Roberts, a lovely knitwear-based yarn for book one was developed. And towards the end of making this first book, Lou suggested that I might want to have a think about further Frank and Bert adventures. So I scarpered off and did just that.

This was the first time I’d been asked to write a second story featuring established characters and their world. There are pros and cons. On one hand a lot of the fundamental elements are already there. On the other hand, well… a lot of the fundamental elements are already there. What I mean is that there are constraints, things that are already set-up visually or that are in the characters’ personalities or relationship and you can’t do anything that isn’t credible within that pre-existing world. Again, Lou helped me loads in navigating it and this time Frank and Bert don their crash-helmets and go on a bike ride. Things inevitably go a bit wrong again.

Each story features an activity that children can relate to – playing hide-and-seek or learning to ride a bike. And then, just like real life, something doesn’t go quite to plan. There’s a bit of a disagreement or a dilemma to overcome, and they have to try to do the right thing by their friend and themselves.

An important point was to make sure that Bert doesn’t fall into the cliché of being the slightly dozy friend who is never quite up-to-speed on what’s happening; the hapless punchline to the story. In the first book when Frank lets Bert win at hide-and-seek, it at first seemed like a nice ending, all wrapped up. But something was a bit off. Frank knows Bert didn’t really win and we know Bert didn’t really win. We’re all in on a ruse that Bert is blissfully unaware of and that felt a bit patronising, slightly cruel. So a big part of the story was to find a final twist, something that lets Bert have his moment, to show us that he isn’t as daft as he at first seems and can even be a little bit sly, just like his friend Frank.

Hopefully Frank and Bert will be having many more adventures. I’m working on book three now (featuring picnic-based peril) and I’m starting to feel like the best friends are making their own minds up about what happens in the story. I think I might just let them get on with it, what could possibly go wrong? 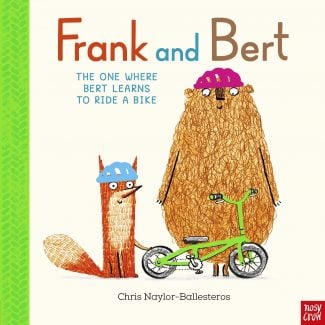 Frank and Bert: The One Where Bert Learns to Ride a Bike