We're all doomed - or are we? Reflections on Robert McCrum's article for The Observer on the end of writing as a way of making money - Nosy Crow Skip to content 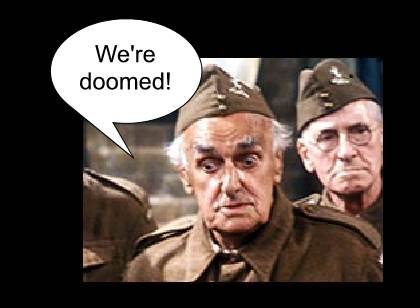 We’re all doomed – or are we? Reflections on Robert McCrum’s article for The Observer on the end of writing as a way of making money

We – OK, I – felt a bit weary, but pretty chipper this weekend, after a few days at what seemed to me to be a particularly informative Independent Publishers Guild Conference at the end of last week. We even won a few prizes.

Then I read this piece by Robert McCrum about “the end of an author’s life”, and I felt a bit glum and a bit cross. He’s not talking about a particular author who has died; he’s saying that writing as a way of making a living has died. He’s writing about literary authors, and that’s not really my area of expertise, but it’s all a bit James-Laurie-as-Private-Frazer: “We’re all doomed”. And it seemed to me to be another worrying example of media coverage of writing, reading, publishing and bookselling teetering on an edge – a “heritage” thing, that needs protection to survive.

I used to work with Robert McCrum. Well, I use the word “with” loosely, as I’d be amazed and flattered if he were be able to pick me out in a line-up. But he was Editor-in-Chief at Faber while I was a rights assistant, and, later, after someone left and my boss was incapacitated for many months with intractable amoebic dysentery (that he claimed he’d contracted from a Cornish pasty he’d bought in Taunton, but I was inclined to attribute to a recent trip to Pakistan), I got the title of rights manager. Senior members of staff (a group including Robert McCrum that was referred to by junior members of staff as “Evans Above” after Faber MD Matthew Evans, now Baron Evans of Temple Guiting) spent a lot of time at lunch, and even more at The Groucho Club, and Faber, in particular, grew fat on income from Cats, The Musical. What I am trying to say here is that the experience of publishing that Robert McCrum looks back on so fondly was not really terribly representative of the industry even as it was then (as I discovered when I moved on from Faber). And incidentally, I am pretty sure that many of the writers that Robert McCrum was publishing at Faber back then struggled to make a living from writing.

I think that there are several things to say here.

The first thing I’d like to say is that it would be stupid to deny that publishing has been hugely disrupted over the last few years. Like most industries, it’s been disrupted by financial crisis. Like many industries, it’s been disrupted by technology. Not only is the way that many of us read and write shifting from paper to screen (I’m not talking just about books, here, but about any and all kinds of reading and writing), but the way that we buy what we read has now at least partly moved online too (Amazon represented 37% of the UK’s total print and ebook market last year, and in the US it’s closer to 50%). Technology brings with it concerns about piracy – probably exaggerated where books are concerned – and the spectre of the death of copyright. The principle that makers should own what they make and should be compensated for its use one that I profoundly believe in, but it’s a bigger idea than the scope of this particular blog post. UK print book purchasing shows a long-term pattern of decline (it’s worth saying right now that purchasing of children’s print books remains cheeringly resilient). The loss of independent book shops (now down to under 1,000 in the UK) and book shop chains like Borders has reduced the number of physical spaces in which people can discover books. There are surveys, including PISA and Nielsen’s Books and Consumers surveys, that are worrying for those of us who care about literacy, as they suggest that reading standards are falling, and, for those of us who care about literacy and books, suggesting that children report less engagement with reading.

But the idea that technology and change are the enemies of reading is just plain wrong. We read more now than we’ve ever done. Even if you ignore the explosion in reading of non-books, including blogs and other online-only writing, combined sales of print and ebooks rose in the US by 14% between 2008 and 2012. More of us are creating content than ever before, and many of us are finding, through technology, new ways of reaching our audiences. Technology and change have provided us with new ways of connecting with one another to recommend and talk about books. And technology and change have provided us with ways of making entirely new kinds of reading experiences including our own highly-interactive multimedia apps, and reading experiences like Fish or Blackbar or Faber’s (do you see what I just did, there?) The Wasteland App (Faber is a brilliant publisher).

The second thing I’d like to say is that any implication that publishers are battening on writers and underpaying them feels to me to be wrong. The article focusses on advances, not royalties, and the truth is that I cannot imagine that there’s a trade publisher (as opposed to an educational, academic or professional publisher, whose business models I’m not so familiar with) out there that does not have to write off unearned advances at the end of the year: this is the money you pay in advance to authors that you know they won’t ever earn out. For some adult trade publishers that I can think of, or for a publisher who takes a massive gamble on something that doesn’t pay off, it can be as much as the amount the authors actually earn in royalties. So if, as is the case with Nosy Crow, maybe around 15% of a publisher’s sales revenue is paid to authors as royalties, for certain publishing companies – probably the ones that Robert McCrum’s anecdotes relate to – there’s an additional 10% to 15% of unearned advances to account for. This means that many publishers are paying between a quarter and a third of their total sales revenue to authors. I’ve written about how publishers like us pay authors here. And if you’re wondering what publishers do with the rest of their revenue, you might want to read this. Of course, unlike the days that Robert McCrum looks back on with such nostalgia, authors now don’t have to rely on publishers to find their audience at all. They can self-publish in a myriad of ways, and a few of them do so very lucratively. If, as publishers, we can’t articulate why it will be better for a given author or illustrator to publish with our own publishing house rather than to self-publish, we shouldn’t be publishing that author or illustrator, and if we can’t be convincing on this point regularly, maybe shouldn’t be in business.

The third thing I’d like to say is that no-one owes authors (or illustrators) a living. No-one owes publishers or booksellers a living either, for that matter. Of course I think that there is a role for state support of reading. I think that there is cultural, social and long-term economic value in keeping public libraries open. (If you’d like someone to articulate that view better than I ever could, here’s Caitlin Moran on the subject). And I for one support tax spend on school libraries and on early intervention programmes for children who otherwise wouldn’t be exposed early on to reading, to name just two other literacy-building opportunities. But, otherwise, writers, publishers and booksellers do – and I think should – stand or fall by whether they are producing things that people want to read and buy. The truth is that it’s always been the case that there are writers who make a great living out of their writing and writers who don’t. We remember Dickens and Enid Blyton and J K Rowling and EL James, and we forget most of those who made less of a commercial impact. I am not saying that there’s necessarily a link between being commercially successful and culturally interesting or impactful. I entirely accept that there’s great stuff being written out there that hasn’t, or hasn’t yet, reached its audience (I am thinking of a book like Stoner, widely read and commercially successful only 50 years after it was first published). But the market-place is the mechanism we have, and I can’t think of a better one that wouldn’t be at least as unfair or subjective.

There’s no point being Pollyanna-ish, and pretending that these aren’t times of challenge as well as opportunity in the book business. However, it seems to me that articles about the commercial demise of writing and reading (particularly if they’re illustrated with a big photo of a writer tapping away on a shiny Mac in a perfectly lovely kitchen, but that’s another point), may actually put off the audience that we need to gain, excite, engage and retain. The Robert McCrum piece risks sounding a little bit… whiny, and coverage like this makes it sound as if all of us engaged in the book industry are collectively some sad, fat, old dodo stumbling helplessly about on the forest floor waiting for extinction. Let’s, instead, focus on telling people what great stuff, new and old, we have for them to read, and make it easy for them to find it, buy it, and tell other people about it.

I really enjoyed this rebuttal of the Robert McCrum piece too.

What do you think? Is it getting harder or easier for authors to publish and to live than it was 25 years ago, or even five years ago? Is the entire book industry going to hell in a handbasket or evolving to meet the challenges and opportunities of technology? You can comment here or on Twitter and we’d be really interested to hear from you.