Welcome to The Escape – a guest post by Christopher Edge

Escape Room is a story about finding the Answer and saving the world. It follows Ami as she enters The Escape, the ultimate escape room, but as the Host locks Ami and her teammates inside the first room, they quickly realise that this is no ordinary game and the stakes are sky-high…

I finished writing Escape Room back in the strange days of the first lockdown, when the desire to escape the same four walls was particularly strong. I wanted to write a story about the problems we face in the world today, but it was important to me that this story was a story of hope. From global warming to plastic pollution, young people are the ones who are raising their voices loudest about these problems and they’re also the ones who are showing the bravery and imagination we need to solve them. This gave me the idea for The Escape – an escape game where five young players have to work together to find the Answer to save the world.

As part of the research for the book, I played several escape games, from searching for a lost archaeological artefact in a locked museum to trying to solve a mystery trapped on a nuclear submarine! What I love about escape games is the way they completely immerse you in another reality. When you’re playing an escape game, you’re part of the story and the decisions you make can mean the difference between success and failure, whilst the actions of the other people on your team can either help or hinder the escape!

I wanted to give the readers of Escape Room the same immersive experience, taking them on a fast-paced, puzzle-solving adventure into a host of different realities. The best escape games give players a trail of clues to solve and I wanted the puzzles and mysteries that Ami finds inside The Escape to give the reader clues about the story too.

An escape room is like the ultimate locked-room mystery, but in The Escape there is more than one room for Ami and her teammates to reckon with. From a cavernous library of dust to an ancient Mayan tomb, a deserted shopping mall stalked by strange creatures to the command module of a spaceship heading to Mars, the perils of The Escape seem endless. Every room inside The Escape draws on real-life inspirations, from an unbeatable chess-playing automaton invented in the late 19th century to the Red Queen of Palenque, whose Mayan tomb was discovered by an archaeologist in 1994, and each one of these settings is inspired by the ideas that lie at the heart of the novel too.

At the start of the story, the Host gives the players some important advice which I hope will help you too as you read Escape Room:

“Remember, all you need to succeed is hidden inside The Escape. The puzzles that you find and the challenges you face might seem impossible at first, but for you nothing is impossible. Look around carefully. Everything is part of the game. Use your mind to find the Answer. Find the Answer before it’s too late.”

As I’ve said before, I think children’s books are the most important books you’ll ever read. These are books that can help you to understand about the world, they can let you escape from the world for a while, but also they can inspire you to build a better world. I’m constantly inspired by the young readers I meet and I know that they possess the imagination and creativity we need to build a brighter future.

I hope that you’ll feel inspired after reading Escape Room and enjoy your visit to The Escape. Good luck!

Read the first two chapters below: 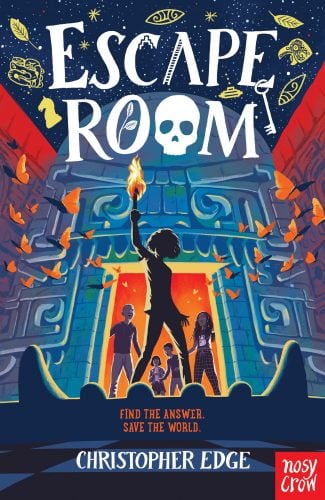