"What have they done to my library?" - Caitlin Moran's latest column - Nosy Crow Skip to content 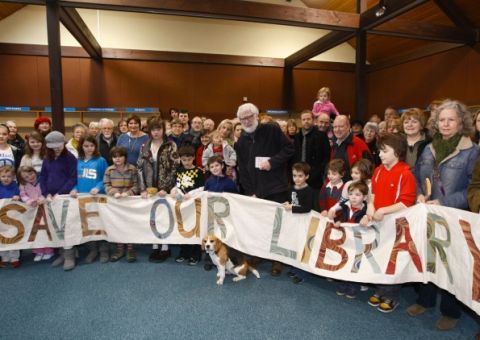 “What have they done to my library?” – Caitlin Moran’s latest column

This Saturday’s Times featured a fantastic column from Caitlin Moran on the importance of libraries – not the first time she has written on the subject. This piece is re-published here with Moran’s kind permission.

I went up and saw some of the austerity last month.

I hadn’t intended to – I was just visiting my old home town – but I ended up in my local library: the one I lived in between the ages of 5 and 15. And there, in the library, was some austerity. A visible thing. Something you could mark on a map, with a pin.

I’ve written about that library before. About how this place was the delight of my life – a thing I would have married, in my pre-pubertal anthropomorphic phase. I would have been as happy as a clam and, if the gods had so blessed us, in later years, I would have got pregnant by that library, and we would have raised a couple of little mobile libraries together.

It was a Sixties red-brick cube, with the shelving inside packed tight. And the shelving had to be packed tight, for there were so many books inside – that place was rammed full of every and any kind of book you could think of. Carousels of “trashy” paperbacks. Big shelves for atlases and illustrated histories of the wars. Smaller shelves for hardback fiction. Audiobooks, which I was very snobbish about. “I have read 337 books,” I wrote in my diary. “I mean properly read – with my eyes. Not audiobooks.”

I learnt everything there. Sex, witchcraft, baking, butchery, geography, navigation. I read Larkin sitting on the lawn outside, and I cried to be the real girl, in a real world, from his Lines on a Young Lady’s Photograph Album.

That library was a Pandorica of fabulous, interwoven randomness, as rich as plum cake. Push a seed of curiosity in between any two books and it would grow, overnight, into a rainforest hot with monkeys and jaguars and blowpipes and clouds. The room was full, and my head was full. What a magical system to place around a penniless girl.

But then – 21st-century austerity. I knew what the cuts had done to libraries: I’d seen the piles of books for sale outside them in Swindon and Barnet. But they weren’t my libraries, so I couldn’t calibrate what was being thrown out and what was being kept. I could when I went back to Wolverhampton, though, because that library is the inside of my head. I know everything about it.

And everything had gone – or near enough to make no difference. Most of the shelving was gone; all that was left were racks of Andy McNab and Fifty Shades, and rip-offs of Fifty Shades. So few books. Weepingly few books.

To the side, a single, lonely carousel labelled “Classics” – in the midst of all the pink and gold-embossed lettering, the Brontës and Dickenses looking like martinets in the middle of a hen night. And, by the door, old books piled high, for sale: the history books, the maps, the novels and poetry.

Now, you may say we have no need for reference books any more, now that we have the internet. Why go to a library (because you need to get out of the house! Because you will die if you stay in the house!) when you could just google something (because you have no computer! Because you are old, or poor, or in a valley where broadband does not venture!) instead?

Well, because a search engine will just show you what is most popular, rather than what is best. You, like a billion other googlers, will be herded to the footage of a shark biting a man, or the same shallow Wikipedia entry: we are all reading the same 10,000 words, walking the same paths, thinking the same thoughts, filtered through the single lens of Google.

We are approaching a mono-knowledge – diametrics herding us; migrations of thought, as unquestioning as a million dumb buffalo.

But do we need libraries to be clever? What is wrong with a room containing only light modern fiction about mercenaries or submissive sex? Can the working classes not have rooms of cheap pleasure?

What’s wrong is this: it will not survive.

If you take out the intelligence and knowledge from a library – if you take away the purpose, the usefulness, so that it is filled only with sugary treats – then when the next round of austerity cuts come in, that library will die.

No one will fight for it – no one can fight for a room like that. How could you argue to put money into that neutered, monosyllabic, intellectually sterile room when there are hospitals and schools?

This is a tactic we must all grow furious about. That when something cannot be axed straight away – because it is important, because it is loved, because people protest – that thing is then starved or bled until it is a weak, mutant ghost. Until no one wishes to defend it. Until no one can defend it, because all the words they could have learnt and used are now heaped up by the door, for sale.

Where I Work: Leigh Hodgkinson