This month we’re absolutely delighted to have published The Girl Who Lost a Leopard – the third thrilling adventure set in a fictional Sri Lanka from author Nizrana Farook. And today we’re very excited to be sharing a guest post from Nizrana on the setting for her books, her reasons for choosing a leopard as her third animal adventurer, and what the central characters of Selvi and Lokka taught her. Nizrana was born and raised in Colombo, Sri Lanka, and the beautiful landscapes of her home country find their way into the stories she writes.

The Girl Who Lost a Leopard is my third adventure set in the fictional island of Serendib. Serendib is based on Sri Lanka, the country of my birth and where I was raised. I moved to the UK as an adult, so when I think of my childhood I think only of Sri Lanka. And so when I started writing for children, and when I looked into my own childhood, I went with my own part-real, part-imagined version of Sri Lanka as the setting.

That first book was about a girl who stole an elephant. I was swept away by the adventure and wanted to write more. Though a relatively small country, Sri Lanka has quite a lot of variation; from the rainforests to the misty green mountains to dry zone forests and golden beaches. So I set the second book by the sea and this third one in the mountains. Once upon a time these mountains were largely uninhabited and full of leopards, and this was the time I went to.

After I’d finished writing about an adventure each featuring an elephant and a whale, I began to think about what my next animal adventurer could be. I was pulled by the idea of a leopard quite early on. Leopards have a sense of mystery that the other animals I’ve written about before haven’t. They seem more aloof, elusive and enigmatic. I wondered what sort of companion one would make on an adventure!

I also wanted to explore what a bond with a leopard might be like for a child, while allowing the animal to still remain wild. Even the thought felt exciting and laced with danger. Wild leopards and humans don’t mix! Or do they? Selvi the main character and Lokka the leopard share a bond so strong she’d do anything to protect him, and vice versa. They’ve built up their relationship slowly, in little steps of trust. One of my favourite things that happens in the story is how the girl’s and the leopard’s lives mirror each other throughout. They’re both harassed by evil men who want to cut off their freedom. They’re both captured and imprisoned at the same time, and each must help the other in breaking free and living the life they want.

With each book that I’ve written so far I learn a little more; about the writing process, about a new animal, about conservation and the environment. I was fascinated, and sometimes horrified, by my leopard research. I was looking at so many pictures to describe their behaviour that when I closed my eyes I’d see leopard print! Lokka grew to be more central to the plot than the animals in my previous books. He taught me to notice the little details; the quick blink of leopard eyes, the flick of a tail, a silhouette in the sunset.  But most importantly, what Selvi and Lokka taught me was that animals like him needed us to care, so that they could thrive and be free.

Thank you, Nizrana! You can order a copy of The Girl Who Lost a Leopard from Waterstones here, Bookshop.org here, or Amazon here. 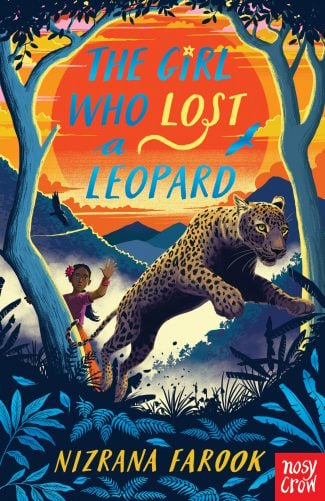 The Girl Who Lost a Leopard

Not Your Typical Kids’ Book: a guest post by Jason Rohan