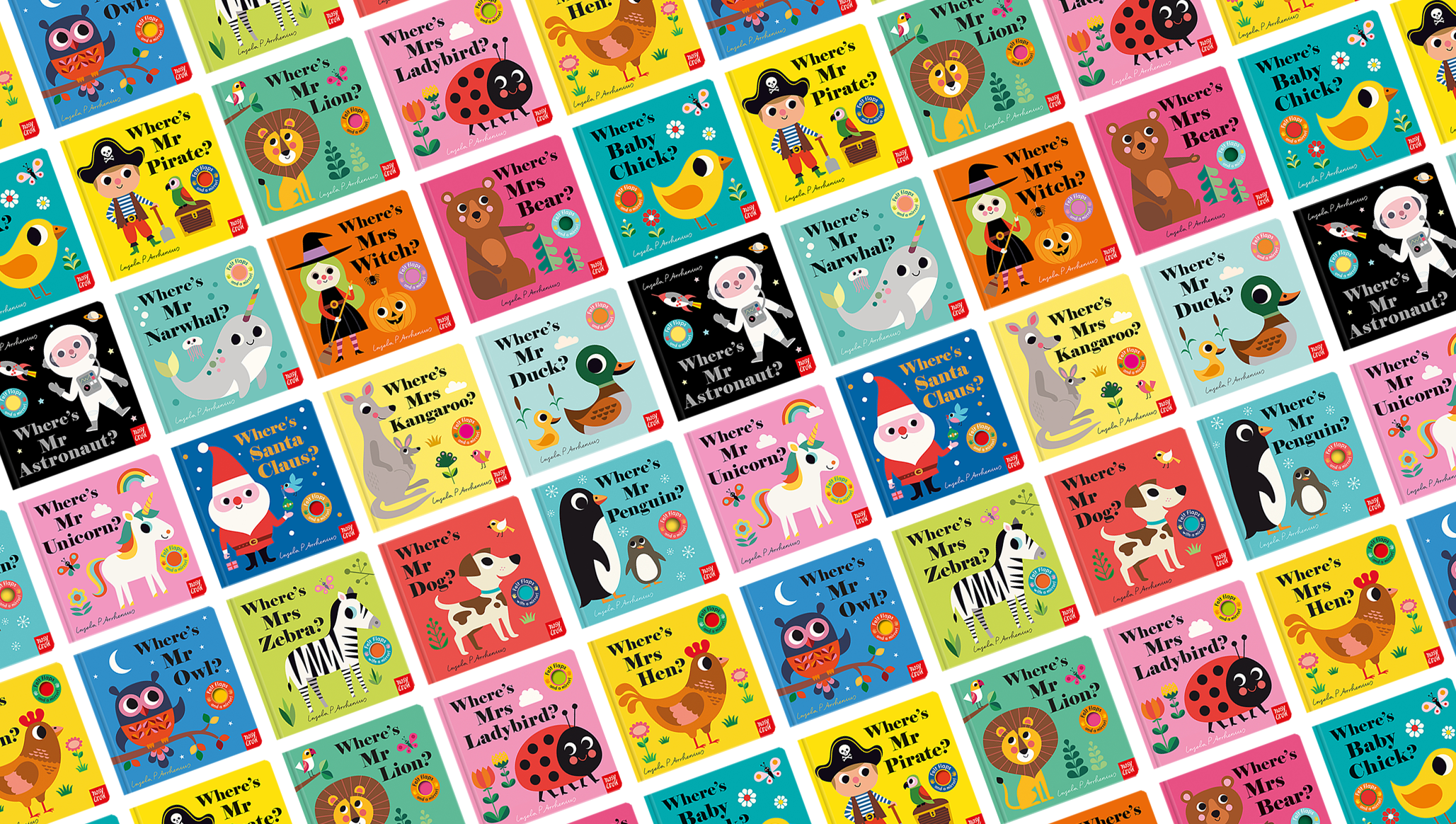 The process of coming up with new series concepts for the preschool and novelty list is never especially linear. For me, ideas tend not to present themselves when I’m sitting at my desk, but when I least expect it. Sometimes a text takes shape when I’m walking the dog: the words start to hit the rhythm of my feet and spill out, step by step. Sometimes I’m inspired by a piece of art, or a vintage toy. And, often, ideas come when I’m having a conversation with a child. Because my own children are secondary school age, I’m not talking to toddlers as much as I once was, so a lot of my inspiration now is drawn from memories of reading to our girls – what they enjoyed, what left them cold, what aspects of novelty books worked for us, what didn’t.

A very clear recollection for me is sharing animal books with them, pointing out the different background creatures in a scene and discussing them. And I remember two things of significance: one, I wanted to make the animals seem friendlier, more characterful, so I always gave them a gender and, two, the gender that I found myself giving them was always MALE. So, for example, I would say, ‘What’s Mr Elephant doing – where do you think he’s going?’ And this annoyed me! I am a feminist, I am totally up for the whole push-for-equality thing and yet unless I checked myself, I called everything ‘he’. As if to be male is the norm, is the ideal.

I came up with the felt novelty concept after our Deputy Art Director, Zoe Bennett, suggested that we do something with Ingela P Arrhenius. I knew Ingela’s work well but Zoe’s prompt caused me to look at it again, and really think about what we could do with her. The felt flaps idea that I developed was based on Ingela’s gorgeous animals, but the novelty required that the animals were naturalistic and pictured in their natural environment. However, what I immediately realised is that if you stand animals on all fours and they don’t have fun names or trousers, it can all get a bit factual and dull, and that is definitely not what I want in a book! Because for me, books need to have warmth and wit, so children can identify with the characters. And my feeling is that you just don’t really identify with a character when it’s referred to as an ‘it’. For example, ‘Where’s Mr Lion?’ is SO much jollier than ‘Where’s the lion?’. It’s a tiny difference, but for me it’s huge.

You can see what happened: I decided to alternate male and female characters, and give them the titles Mr and Mrs. Now, obviously, it’s not completely perfect. I am married, but I didn’t take my husband’s surname, and I use the title Ms. I wrestled with the notion of a title which indicates marital status but using Ms in the book didn’t feel right – just too po-faced and politically correct. And giving names to wild animals was wrong, as well  – too anthropomorphising and even disrespectful. But I think if I met a (real) bear, and I knew she was female, I’d definitely address her as Mrs Bear, not Ms – and definitely not Miss! So that’s what, in the end, I did.

There are occasional grumbles about the use of the married title and I do get it. And the whole debate around gender and identity, and the use of pronouns, throws up yet another set of questions. Perhaps the Felt Flaps simply won’t be socially acceptable in 20 years’ time, as we move further away from binary genders. But at the time that I wrote them, I felt that we needed to score another (albeit small) point for feminism, so that was what I was attempting to address. Happily, the series has grown (we’ve just put the 21st title into production) and has sold almost 3 million copies worldwide, so at the moment it seems that consumers are relaxed about Owls and Tigers – and Cars and Fire Engines – having genders.

You may be interested to know that our Meekoo series has done away with gender and pronouns altogether – I’ll write about that another time.

Thank you, Camilla! You can find out more about all of the titles in Ingela’s Felt Flap series here. The latest book in the series, Where’s Mrs Queen, was published yesterday – you can take a look inside the book below.