Winner of De Leesjury prize: The Pirates Are Coming!

And the number 1 book for 4–6-year-olds (according to De Leesjury – a.k.a Belgium’s The Reading Jury) is … John Condon and Matt Hunt’s The Pirates are Coming!

No fewer than 11,690 judges from Belgium’s De Leesjury cast their vote for their favourite book, and two of the eight books to choose from were Nosy Crow books: The Pirates Are Coming! and The Suitcase. Both books touch upon important messages, with The Suitcase exploring empathy, kindness, and the refugee crisis, and The Pirates Are Coming! promoting community, equality, and perseverance.

Despite not always being a topic that sells well internationally, The Pirates Are Coming!’s fun and modern take on the classic pirate tale has travelled across the seven seas into 11 territories – from China to Iceland. Matt Hunt’s hugely internationally appealing arr-twork and John Condon’s compelling words make this hilarious retelling of The Boy Who Cried Wolf a must-have for all children – landlubbers, scallywags, and seadogs alike. The Pirates Are Coming! will have you exclaiming “Shiver me timbers” in no time – with not one, but TWO exciting twists!

Quotes from the Dutch Publisher:

Condon and Hunt have a clear understanding of the way one should build up tension for younger readers.

[..] a beautiful, colourful and playful adventure, which children can enjoy lavishly.

The end of the story is fantastic. Great to see that the expected gender roles do not apply here.

Tom has a VERY important job; every day he climbs to the top of the hill and watches for pirate ships. But when he rings his bell and shouts !”PIRATES!” a few too many times – and there’s NO pirate ship – the villagers begin to get tired of hiding. So what will happen when the pirates really do show up?

Ahoy: an interjection used to attract someone, or a ship’s, attention

Arr: an exclamation, usually used to express grumbling, disgust or to emphasise a point

Landlubber: a person with no sailing ability

Shiver Me Timbers: an exclamation of surprise

The Seven Seas: all the seas of the known world

Yo Ho Ho: an exclamation to express jolliness 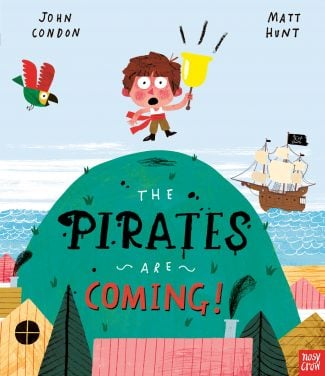 The Pirates Are Coming!