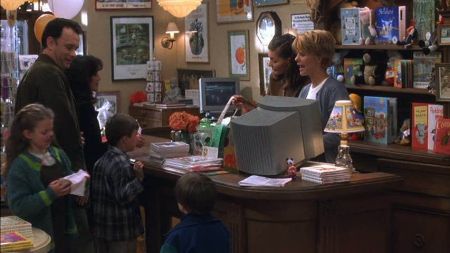 It’s half-term. Yesterday my 12 year-old pulled out an old favourite DVD to watch as we were surrounded by fog drifting down from the Brecon Beacons. It was You’ve Got Mail, the 15 year-old Nora Ephron rom-com. In a classic Pride-and-Prejudice plot with a virtual twist, Meg Ryan is Kathleen Kelly, second-generation owner-manager of the children’s specialist bookshop in an affluent New York neighbourhood, The Shop Around The Corner. Kathleen ends up with third-generation bookshop chain owner-manager, Joe Fox – it’s as if Tim Waterstone, his son and grandson owned and managed Waterstones rather than Alexander Mamut and James Daunt.

What struck me, as it did last time my daughter watched the film and I half-watched it while working, was that I felt sort of anxious for Joe Fox, who was so confident that his big-box bookshop chain with 20% discounting would win through (and, indeed, The Shop Around The Corner folds, and Kathleen is forced to move up the supply chain towards the source, being offered an editorial role at a publishing conglomerate and ending up as a writer).

Joe Fox’s big-book-business view is portrayed as rather soulless. In contrast, here’s Kathleen advocating the kind of expert hand-selling of books that she believes is the preserve of the independent bookstore: “It wasn’t that she was just selling books. It was that she was helping people become who they were going to turn out to be”.

But by the time of its release in 1998, the film was already out-of-date. In May 1997, Amazon, just 18 months old, had issued its initial public stock offering, trading on the NASDAQ, and in the same month, Barnes and Noble sued Amazon, alleging that Amazon’s claim to be “the world’s largest bookstore” was false. Barnes and Noble asserted, “ isn’t a bookstore at all. It’s a book broker.” The suit was later settled out of court, and Amazon continued to make the same claim. Also in 1997, the E Ink Corporation whose technology was critical to ereaders, and therefore the spread of ebooks into the mainstream, was founded.

Joe, however, proceeds oblivious to the clouds of online bookselling and the emergence of ebooks that are gathering above his head. When I mentioned on Twitter my feelings of sympathy for him, someone speculated that he and Kathleen would have had to move out of their prime Manhattan real estate to resettle in Brooklyn, and that their financial situation would have been exacerbated by an unwise investment in AOL stock.

In the film, though, Fox Books are the bad guys – the people using their scale to skew the market to their unfair advantage. Nowadays, everyone in publishing at least is rooting for the big bookstore chains in the context of the many reports of the financial challenges many of them face and their wrestling with the part that online selling and ebooks could play in their future. We love independent bookshops, but we want – let’s face it, many of us need – places where a huge range of books can be comfortably and conveniently browsed, discovered and bought. I love the scale and grandeur of a shop like Waterstones in Piccadilly in London, or Barnes and Noble on Union Square in New York, and other booklovers value the experience of these destination stores too. Recent stats show that half of book purchases on Amazon are pre-planned – people are going to Amazon knowing what they want to buy. I don’t have the up-to-date figures for bricks and mortar bookshops (can anyone reading help?), but I’d bet they’re less. Bricks and mortar bookshops, whether they’re indies or chains, remain important for the seeding and building of the new talent on which our whole industry depends.

In You’ve Got Mail, Joe quotes The Godfather to Kathleen, advising that she “go to the mattresses”, using whatever means she has available to fight for her business. We want consumers to be able to find books in all sorts of places, but as they go to the mattresses, we’re certainly cheering the owners and managers of physical book stores on.

As it happens, here’s an example of “going to the mattresses” being reported today: indie bookstores in the US are suing Amazon and the big-six publishers for shutting them out of the ebook market by using DRM.

A lot has been written on the future of bookselling in the last week or so. Here’s a bit of a round up.

On the BBC Radio 4 programme, The Bottom Line, HarperCollins’ Vicky Barnsley suggested that bookshops might charge people for browsing.

Foyles has held open workshops on the future of bookshops.

The Bookseller blogged on the new willingness to explore new ways of doing things among booksellers.

The Irish Times yesterday suggested that government or church funding or subsidy might help to create an iconic bookshop in Dublin that would act as a cultural hub.

And we invited you to tell us what you thought a bookshop should be like in this blog post.

Finally, this joyful stop-motion animation captures some of the vibrancy and colour of a great physical bookshop, with its punchline, “There’s nothing quite like a real book”. Or a real bookshop.