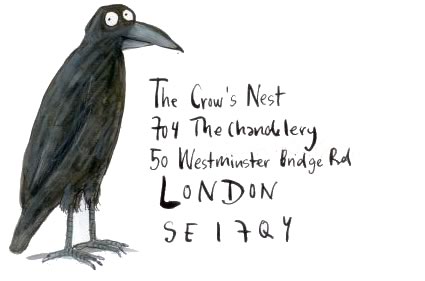 We’ve received two illustrations to mark the launch of Nosy Crow. The first we received was this one, from one of our favourite illustrators, Axel Scheffler.

We said we’d do a Who’s your favourite children’s book illustrator survey, so click on the link to let us know what you think. The illustrators listed are all ones that appeared in the original post, or that you’ve suggested to us subsequently. Of course, we think all the illustrators we’re working with are great, but we felt that it wouldn’t be entirely democratic if our own choices were over-represented. We’ll tell you who your top five are next week.

Kate went to the hilariously-named Society of Bookmen dinner last night with that nice Carly Cook from Headline. The debate was, “We (or this house, or something formal like that) believe that celebrity publishing is good for the booktrade.” Carly knows her celebrity onions and no mistake. It’s a funny old society, and Kate was told that she can’t tell you the result of the debate, or she’ll have to kill you. She thought that the speakers – Mark Booth for and Liz Thompson against – seemed to hold views that were pretty similar, actually … but, of course, she’s bound by the rules of the society to conceal from you exactly what those views were. In fact, what with the secrecy thing, it all turns out to be less good post-fodder than she’d hoped …!