The Children’s Bookshops of Bangalore - Nosy Crow Skip to content 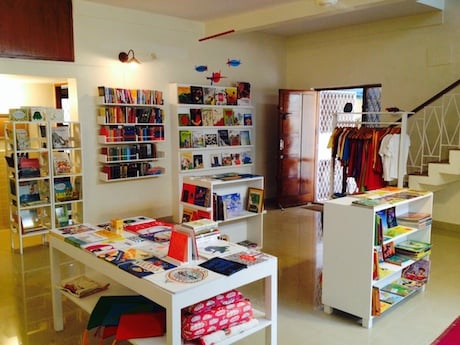 The Children’s Bookshops of Bangalore

Today’s guest post is by Maegan Dobson Sippy, on the children’s bookshops of Bangalore. The picture above is of Lightroom Bookstore.

“Use it or Lose it” Nosy Crow tweeted, in response to a sobering report in The Bookseller that the number of indie bookshops in the UK had dipped below 1000 for the first time since records began.

The tweet popped onto my newsfeed just as I was researching and writing a piece about the vibrancy of the literary scene in Bangalore, my home for the last two years. Why was it, I wondered, that the trend in South India is of openings, while back in the UK each month seems to bring news of another bookshop closing its doors?

Although I worked in an indie bookshop in a small English market town before coming to India, my absence from my home country for the last four years has meant that I’ve only been able to keep track of UK developments online and through occasional visits. Here in Bangalore, though, I’ve watched as not just one but three bookshops specifically for children have opened in the city over the last eighteen months.

Just over a year ago Bookalore launched, with the aim of filling the gap that exists between the child and the book, and allowing children to encounter books in new and exciting ways. The idea was to achieve this through monthly events at various locations across the city. Using a book as the inspiration for each event, they’ve since had activities spanning storytelling, craft, art, creative writing and music.

Soon after launching their programme, they realised that parents and children wanted the opportunity to purchase not just the books that had been directly explored in events, but a far wider range of reading material. So emerged Funky Rainbow, a bookshop that travels with Bookalore to its events around the city, run by members of the Bookalore team. They exclusively stock books by Indian writers, believing that these books work best for Indian children in terms of connections and experiences. It’s the first time I’ve known a bookshop to emerge from an events programme, rather than the other way around.

Some of the Funky Rainbow team

A few months later came Lightroom Bookstore, tucked away on a largely residential street near to the centre of town. At the opening I was genuinely stunned by the mass of customers and well-wishers who’d turned out to mark the beginning of a space devoted entirely to children’s literature.

Unable to fight my way through the crowd on that first hectic day, I fell in love on later, more peaceful, visits, when I was able to savour the beautifully designed space, and to fully appreciate the love and knowledge that had gone into the curating the selection of books. As far as I am aware, they are the only Indian stockists of books by experimental international publishers such as One Stroke from Japan and Italy’s Corraini Edizioni.

Kutoohala has been the most recent addition to the children’s book map in Bangalore, opening its doors for the first time six months ago. Meaning curiosity in Hindi, the space in South Bangalore aims to bring together a collection of books that nurture creativity, social and emotional development, problem solving and a host of other skills.

The shop is made up largely of books, but environmentally friendly and educational games – largely with an Indian context – also find space. Unlike Lightroom, there is also a section devoted to used books. They seem to have sourced these internationally, and they are priced extremely reasonably, making it an inexpensive way to pick up picture books from that aren’t usually available in India.

What they’ve become best known for, though, is their programme of events both for children and their parents. These are not strictly book-focused, and have included healthy eating sessions, art classes and science workshops. Next month, during the long summer holiday, they’re holding a five day programme which allows children to put together their own magazine, in collaboration with some of the Bookalore team.

While each of these bookshops has its own personality and specific purpose, all of them offer something above and beyond being a conventional “shop”. In the space of a year they’ve all developed event programmes, identified their niche, and generally bedded into their local communities. In a way, what they seem to be doing is giving their customers a whole range of different ways to use them. I hope against hope that this means Bangalore doesn’t ever lose them.

Thank you for sharing this fascinating trend, Maegan! If you’re interested in learning more about children’s bookshops in Bangalore, you can find Maegan on Twitter here and Tumblr here.

12 of the best books with bunnies