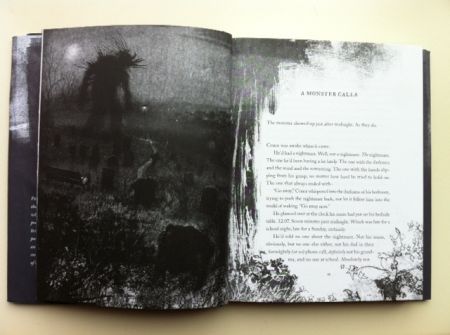 Last week we had the second meeting of The Nosy Crow Guardian Reading Group. The children’s book we discussed was A Monster Calls by Patrick Ness.

There are plot spoilers in this blog post, so be warned.

We all had a strong emotional response to the book. It was described as “wonderful”, “beautiful”, “powerful”, and “visceral”. Many of us admitting to having been moved to tears even on second readings (by which time, some of us reasoned, we’d thought we would be partly inured to the impact of the book because we were in part prepared for what happens… at least one of us had thought that Conor’s mother might be saved by medicine made from yew). But, even on a second reading, we were, as one of us put it, “still shell-shocked”, and another described how her husband had asked her to stop reading it as her sobbing was stopping her 15 year old getting to sleep. With a sad inevitability, many of us felt that we were able to bring our own (adult) experience of bereavement to our reading of the book, and many of us spoke about how true and real the evocation of grief and of isolation was.

In our blog post introducing the title as a reading group book, we asked a few key questions:

1) Is this book a work of fantasy?

2) Who goes on the longest emotional journey?

3) What do you think the relationships other than that between Conor and the Monster add to the novel?

4) Does Conor ever lose your sympathy?

5) Are the illustrations necessary?

The first question was the trickiest and most of us were willing, in the context of this novel, to accept a great deal of ambiguity. As the monster says, “your mind will contradict itself a hundred times each day”. The essential question was, is the monster an imaginary projection of Conor’s need, or is it something outside him?

For some of us, the monster was the personification of Conor’s fear, or a physical manifestation of his emotional turmoil. Conor, who himelf defines the monster as “only a dream”, calls the monster into being by the power of his imagination… and by the power of his need for someone to connect with and, ultimately, tell his story to. No-one, other than Conor, sees the monster (or the needles, or berries or sapling mentioned below, for that matter), and any damage he appears to do to Conor’s house – breaking the window in the course of his first visit – is not there in the morning. But for some of us, there were strong indications the monster was real (so this was a fantasy novel). The needles (swept up and put in the bin the next morning) and the berries and the sapling were a material indication of this, but so, too, was the fact that the monster tells stories that Conor does not know with endings that shock him profoundly. The monster describes himself as elemental: “I have had as many names as there are years to time itself!… I am Herne the Hunter! I am Cernunnos! I am the eternal Green Man… I am the spine that the mountains hang upon! I am the tears that the rivers cry! I am the lungs that berathe the wind! I am the wolf that kils the stag, the hawk that kills the mouse, the spider that kills the fly! I am the stag, the mouse and the fly that are eaten! I am the snake of the world devouring its tail! I am everthing untamed and untameable!… I am this wild earth, come for you, Conor O’Malley.”

On the second question, most of us agreed that Conor goes on the longest emotional journey… but perhaps it would be best to describe it as a journey towards understanding and maturity – and specifically to the recognition that ambivalence and ambiguity are part of even our most extreme feelings.

However, there were those who felt that the Conor’s grandmother’s emotional journey was the most compelling, with her having made a real connection with Conor by the end of the book… though none of us felt that the author had taken an easy route and provided Conor with a wholly changed and sympathetic grandmother to “compensate” for the loss of his mother. And, as one of us pointed out, the grandmother had wigs to lend to her daughter. Perhaps the author was hinting that the grandmother had had cancer too.

On the third question, most of us felt that the relationship between Conor and the monster was so compelling that there was relatively little room for other relationships. Of course, part of the point of the book is that Conor is completely isolated.

Few of us, in answer to the fourth question, felt that Conor did lose our sympathy… but that wasn’t an absolutely uniform feeling: at least one of us found him pretty unappealing throughout, and was particularly shocked by his destructive impulse and his violence. We asked ourselves if we would have felt the same level of sympathy if Conor had been a girl… and we dismayed ourselves with our own answer: we felt that we might have felt less sympathetic towards a girl who destroyed rooms and beat people up.

The answer to the fifth question was largely determined by what edition the members of the group had read! If they’d read the illustrated edition (which Patrick Ness himself, in a sequence of Tweets, said he viewed as the better of the two), they felt that the illustrations provided a depth and, interestingly, sometimes provided a pause, a sort of breathing space and a relief, in the intensity of the story. Few felt they’d lingered on them, though. Those of us who’d read the unillustrated edition were happier with the pictures in our own heads, and some of us felt that the pictures made explicit and less ambiguous things we were happy to leave less fixed.

We had a conversation about who the book is for. I can’t say that we reached a conclusion on this point. Some of us felt that it would be useful to an older (11+) child or teenager facing or having had the experience of bereavement. Some felt comfortable sharing it with 11+ children who were not dealing with bereavement or the prospect of it (I gave it to my children at 11 and 13, though only the 13 year-old read it), but others felt it was too grim to give to a child as young as 11 and would only want to see it in the hands of teenagers. They felt it would engender fear in children who had no (immediate) need to be fearful. Many felt it was “for everyone”, and certainly for adults. One member of the other group said she’d bought 11 copies of the book for members (adult, I think) of her family when the family had suffered a bereavement. The concerns were about the fact that Conor’s mother’s illness was described in some detail, but I also think that the fact that there was no happy ending and that there was such ambiguity in the book made people uncertain about giving it to a child. As one of us said, “I would give a child a Jacqueline Wilson book about death before this one… because it’s too real”. (I wrote about the responsibilities I feel as a publisher of books for children here in a way that has some relevance to this uncertainty.)

I asked people what the book was about. For me, it’s about the guilt that comes from denial, and the healing that comes from truth. The monster calls Conor by name, but, also, Conor is the monster, who calls the yew tree. As the monster says, “You felt the truth of it when I said that you had called for me, that you were the reason I had come walking. Did you not?”, and Conor feels his own feelings – the feelings manifest in the nightmare that is at the centre of the book – to be monstrous. He lets his mother go, because, though he doesn’t want her to die, he wants this terrible part of his life to be over: “I can’t stand it any more!… I can’t stand knowing that she’ll go! I just want it to be over! I want it to be finished.”

We struggled to discuss flaws in the novel. For some of us, the focus on Conor and the monster was to the exclusion of the full development of other characters, with the intelligent villainy of Harry feeling particularly one-dimensional (and drawing comparisons with Draco Malfoy and his henchmen, Crabbe and Goyle in the Harry Potter novels). The teacher in our group felt uncomfortable with the way that the bullying was dealt with by the school, and some of us felt that the adults’ failure to be properly honest to Conor about his mother’s death – their complicity in his denial – was exaggerated. One of us felt that the book was a little “incoherent”, and had wanted, for example, a greater link between the stories that the monster tells and the unfolding events of the story. (Though, as the monster laughs incredulously, “You think I tell you stories to teach you lessons… you think I have come walking out of time and earth itself to teach you a lesson in niceness.

Contradiction is at the heart of the novel – it is, for example, by holding tightly to his mother that Conor can finally let her go – and this made the novel more slippery – harder for the groups to get an intellectual grip on – than, say, R J Palaccio’s much simpler Wonder. This was a book about inarticulacy about which at least some of us (I put myself in this category) struggled to be entirely articulate! I asked which novel people had preferred discussing: A Monster Calls, or Wonder. I think, on balance, that though we preferred A Monster Calls, most of us found Wonder more pleasurable and easier to discuss.

But what do you think?

Do please let us know your thoughts in the comments section here, on Twitter or, even better from our point of view and the Guardian’s, on the Guardian page for the reading group discussion.